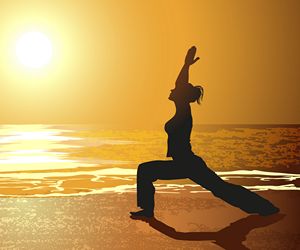 The world hierarchy in Yoga looks like the following. There are seven main worlds: the World of Earth, The world of intermediate space and the Sky world comprising (uprising) the world of Mahendra, the world of Pradjapati, the triple world of Brahma (World Dzhnana, World Tapas, World Satya) All the sky worlds together are called Worlds-Svar.

The World of Earth is situated above the worlds of hell and ends with the top of the mountain Meru. Here dwell various living (corporal) beings. Between the top of Meru and Polar Star there is the World of intermediate space. It is filled with stars, planets, constellations and other space bodies. It corresponds to the objective physical space known to modern science.

The sky world is the spheres of spirit being. They are inhabited by gods (spiritual creatures) of different degrees of perfection. The highest of them are those who achieved non-incarnation. They experience the state of liberation and are in none of the worlds.

Sacred literature points to different number of gods: 33, or 333, or 3306, or 3339. Practically, the most respected ones in all religions are 9 gods. Gods are the supreme creatures controlling the world. As in any other polytheistic religion, each god has his specific functions. Some gods look like usual people, but they are, as a rule, of huge height; another ones are similar to people but having some features of their organism (4 arms, 3 eyes, etc.); the third ones look like animals ( e.g. monkeys); the forth are half-people / half-animals (e.g. the king of birds Garuda is depicted with the eagle’s head and wings and a human body). On of the gods (Brahman) has no visible body.

Gods require worship which is designated by the word ‘pudzha’. Gods are worshiped in temples or at home in front of the altar. Pudzha includes awakening the gods in the morning by musical sounds in front of their images (e.g. ringing the bells); bringing flowers, water and food to their images;prayers, etc.) Nine most worshiped gods can be divided into three triples.

Vishnu (‘omnipresent’, ‘penetrating everywhere’) is the supreme god in Vishnuism. Beside the function of being the supreme god, he has two more specific functions. Firstly, he is the guard of the Universe. The Universe is created by Brahma, but the created Universe needs safeguard both from its untimely destruction and from the seizure of power over the Universe by demons – that is what Vishnu does. Secondly, he helps people to solve their life problems.

Most often, Vishnu is depicted (in drawings and sculptures) as a four-armed man. In one hand, he is holding a battle shell (he is trumpeting during the battles), in the other — a stick, in the third — a chakra (a missile weapon as a metallic disc), in the fourth — a lotus flower. The weapon in three hands symbolizes Vishnu’s readiness to fight against the power of evil; the lotus flower symbolizes his love to people and readiness to help them. To characterize Vishnu, there is an important term of ‘avatara’.

This word means ‘descent’ in the direct translation. In its essence, avatara is another and earthy body of the god. Together with another body, the god gets another name. During the transmigration of the god’s soul into the earthy body, this soul simultaneously stays in the sky, in the main god’s body. This soul as if appears double. The second (additional), physical god’s body exists for some time only. Then it dies, and the god’s soul returns into its main and eternal body.

According to Hinduism mythology, Vishnu has already had 9 avataras and will have ane more in the future. These are avataras which had been before: 1) life in a fish’s body; 2)life in a turtle’s body; 3) life in the body of a wild boar; 4) life in the body of half-lion/half-human. So, in four of first avataras, Vishnu’s soul didn’t inhabit in a human body. In five of the rest avataras, it lives in a human body. 5) body of a dwarf called Vamana (the word ‘vamana’ itself means ‘a dwarf’); 6) body of a man called Parashurama (‘Dark man with an axe’). He was a warrier, a Brahman’s son who was always with a battle axe.7) body of a man called Rama (‘Dark’); 8) body of a man called Krishna (also ‘dark’); 9) body of a man named Buddha (‘Enlightened’). The latter is the founder of Buddhism. The future 10th avatara will also be in the body of a man named Kalki. According to Hinduism, Kalki will ride on the back of a white horse and wearing tsar clothes. That is why this avatara is called ‘the tsar on the back of a white horse’. He will come plenty years later when the power on the earth belongs to scoundrels. Kalki will punish scoundrels and set a Golden Age on the earth.

Shiva (‘Merciful’) is the supreme god in Shivaism. Due to his specific functions, Shiva is the god of destruction of the Universe (he destructs it when it is time for that according to gods), the god of human death and birth (Hindu followers say: Shiva stands near both the coffin and the cradle), god of wild nature (he cares of both plants and animals). As a rule, Shiva is depicted as a blue-colored man with four arms and three eyes. The third eye is situated in the middle of his forehead (vertically, not horizontally) and it not only sees and also radiates supernatural fire which burns everything on its way. Shiva also has avataras in number of over 20.

Ganesha (‘the chief of the suite’) is the son of Shiva and Parvati, the god of luck and enterprise, the chief of his father’s suite (the suite consists of lower-rank gods). In India, believers-thieves and swindlers consider Ganesha as their patron, the god of thief luck. Ganesha is depicted at the age of a teenager with four arms and a head looking like an elephant’s one. He is the only god in Hinduism who has a trunk instead of nose. Hindu followers try to have a sculpture of Ganesha. They don’t start anything without a prayer to Ganesha. To please him specially, they scratch his stomach in the morning.

Kama (‘Sensitive wish’, ‘Love’) is the god of love. He is depicted as a youth with a bow and arrows in his hands. The bow is made from sugarcane, the bow string from alive bees, the arrows from flowers. When Kama’s arrows reach the gods’ or people’s bodies, they arouse a burning love passion in them. There is a legend that Shiva burnt Kama by the sight of his third eye because Kama dared to send his arrow trying to drive Shiva’s love to Parvati. Subsequently, Shiva gave up to Rati’s begging (Kama’ wife) and let Kama revive in the body of Pradyumba, Krishna and Rukmini’s first son. Kama’s cult is closely connected with Vishnu’s cult and was widely spread in the middle ages.

According to Hinduism, gods are immortal, but there are two exclusions. The first one is Ganesha, the second one is Kama. Kama died being burnt by the fire ray of angry Shiva. But then, at Parvati’s request, Shiva let Kama be born for the second time.

Below the world of Earth, there are the Lower Spheres and the steps of Great Hell.From the top down: the earth vasumati (‘the eighth sphere’, Patala, Talatala, Vitala, Sutala, Rasatala, Mahatala. Six steps of Great Hell: Mahakala, Ambarishka, Raurava, Maharaurava, Kalasutra, Andhatamisra), they rest upon solid earth, water, fire, wind, akasha, darkness. The Lower Spheres are inhabited by bodiless creatures (asuras, rakshasas, bhutas, pishachas, etc.). Rakshasas harm people in all possible ways, and pishachas harm mainly through illnesses sent to people. The demons’ functions are to create evil, to be the antagonists of gods and antagonists of people. But among demons there are such that make some kind deeds.

There are a lot of demons: their number amounts to millions. Demons have body and sex. Usually they look ugly, but to carry out their insidious plans, they can look like men or women. Demons are mortal: their bodies die in fights with gods and people, and their souls die together with the death of the Universe. Sometimes people can perceive demons with their sense organs but sometimes they don’t. In Judaism, as well as Christianity and Islam, the fact is accentuated that people mostly can’t see or hear demons, whereas in Hinduism it isn’t accentuated. Demons are divided into senior and junior. The chief demon is called Bali. He lives in the underground kingdom together with the other demons.

Hell is designated by the term ‘naraka’. In the spheres of Great hell live creatures doomed with their negative karma to a long life in poignant sufferings. In each following division of hell, sufferings become stronger. Those who get to hell are exhausted with insomnia, thrown into the rivers of sewage, made to embrace burning iron, given to feed beasts, birds and snakes, torn into parts, boiled in hot oil, burnt in a flaming well. As this takes place, the unhappy remain alive in order to continue suffering up to the end of the period denoted by their bad karma. It is the head of the dead kingdom, Yama god, who defines what division of hell the soul of the dead person should be sent to, what sufferings it should be doomed to.

The sequence of descending existence plans is complete with Hell Avinchi (‘without escape’). Existence in the last hell division comes outside sansara. Here the most hardened sinners are sent. From the previous hell divisions, the souls of sinners can return to the earth enclosure. From the last division, the escape is impossible. Here the souls of sinners stay up to “the day of Brahma”, and when “the night of Brahma” begins, the souls are annulled.

The ancient Yoga conception of the Universe structure contained the deep heuristic insights (heuristics, from Latin ‘evrica’ – “seek”, “discover”, is the field of knowledge studying the human’s creative, subconscious thinking); e.g. the ideas of multidimensional being, the hierarchy of worlds, variety of life kinds. But together with those ones, there were the undeveloped religious-mythical notions of physical space structure. So, Viasa wrote: “The planets, constellations and stars linked with the Polar star are moving due to the push of the space wind. They all are located above Sumeru (“the queen of mountains”) and rotate around her”. This example relates to geocentricism, the middle-age astronomic system supposing the movement of celestial bodies around the earth what contradicts the polycenticism of modern astronomy.