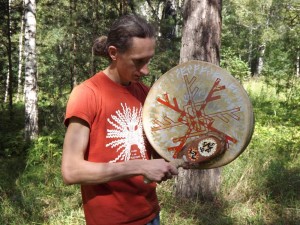 Making the tambourine and its animation is a mystical process and closely connected with its owner’s life, in particular with my – Vladimir Kalabin’s – life. At the moment I can assert: we have each other. I have born it. My tambourine is alive (hereinafter I’ll call it Tambourine) and it has a name. My Tambourine’s name is Khors.

I have never loved Andersen’s fairy tales, particularly about the everyday things which talk to each other. They always end somehow with nothing: some dish is broken, or a miserable Christmas tree is burnt after the celebration and its being lost for a year in the attic. The author can’t do without the torture of the girl having matches who is being frozen near the rich house. And when I say that my Tambourine is alive, it does not mean that I, like Andersen, imagine: the Tambourine has got small legs, he is running to the kitchen and regaling himself with cookies, and they are grieving and complaining while dropping some crumb, “We are dying without seeing the sunrise, so fresh and having no time to become hardened, and not in the master’s mouth but in the Tambourine’s womb!” I have no cartoons, nor the sense that the tambourine is changing in an unusual way in the physical world, e.g. it is radiating light or vibration. But He is alive, without any of my doubts.

Should you pull Tambourine out of its case, take the mallet from its depth, smooth the tassels and ribbons, ring the bells and start tapping on its leather membrane – Tambourine will get alive, start communicating, enjoying itself and singing. He is calling Good Spirits and exorcising Evil ones, straightening and correcting life and fate, is reflected deeply within your breast giving birth to Words. The Words are leaving your breast and rush out of your mouth. I don’t see any pictures, sights or fantastic creatures; I sound together with Tambourine, live together with the sounds, happily with my whole breast. I remember the feeling of happiness when I first took Tambourine to the yoga classes (I play mainly during the yoga relaxation at the end of practice): I am going by the Underground and touching Tambourine – created by me, my flesh and blood — with my shoulder. Later this sense became usual, and many times I found Khors leaving my body into the astral space, or as it is called by initiates in Tibet, I found it in Bardo. Once, like in the film “Mask”, having groped Khors leaving my body, I swallowed it unexpectedly for myself. Now I seldom carry Khors out of home; I take it to the Altai and Olhon Island but always carry Khors in my heart. And while singing the Song of Force, I am clapping my hands but playing the Genuine Tambourine right out of my heart.

When I was writing this Biography, I looked in the Internet and found the papers “How I made a tambourine for myself”. The authors describe what veneer, plywood and glue they used, how they prepared leather and pulled it over the case. And then they hung the tambourine onto the wall, or played it at the ethnic parties causing the smiles of the Tuvinien throat-singing experts and the approval of the eighteen-year-olds enveloped with drug smoke, the sounds being like ‘Northern Sex-Pistols’.

I want the readers to realize some other thing: it isn’t difficult to imitate ‘a Tundra shaman’. People will forgive and swallow everything accompanied with beer and drugs. It’s easy to see pink elephants after eating fly agarics and to discuss it with the fellows. I have never experienced all those stupid things. In “Kastaneda” I value only Juan Ramon Himenes and Henaro’s humor; I also like Horhe Reies as a musician. But, without imitating the Northern aborigines, profanity and swagger of the self-claimed Russian Magi, it is important to realize, put into reality what the Altai guides are still telling fearfully about Great Shamans while sitting around the fire. Without deceiving the gullible people, suckers for sensations. It’s important to recall how it was earlier, before the birth.

To bear the Tambourine so that Tambourine could bear Shaman. What for? In order Him to be.

Spirits call Shaman just before his birth in the World of people. Shaman serves to people, congeners before and after his death; he takes their souls to the World of the Dead and a new soul to the World of the Alive; keeps and tells the Tales about what was and will always be. He works hard with the sick people when neither a healer nor a priest can do anything more, treats and cures the illness. And all these deeds are not for the sake of making a living, but additional to his main activity in which he succeeds. Otherwise he isn’t a Shaman at all. And these words are the unlimited sphere for spiritual losers. Such a marginal person who, according to his words, couldn’t start making a living and became a Shaman: he plays in an ethnic-rock group, keeps company with Krishna and Shiva worshipers, does Yoga a little and even has heard about Rajnish.

Such a Shaman has even got a vargan, attended Nikolai Oorjak’s seminars and knows the sound operator who made the sound track for Yathi. They smoke hookah together, tell about their Power Animals: one has a jaguar, the other has a bear. And his life looks successful because his failure can be attributed to the spirits of the Lower World, and if the Shaman is attached to the national Russian idea and the swastika on the white shirt, then to the Jewish-Masons and the world secret deal that date back to Atlantida. It means that the Shaman fights against the World Evil and he doesn’t smoke the drug but deals with the Plant of Power. Those who call themselves Shamans nowadays can also be included in the description above. It refers to those of Russian origin.

As for the smaller nationalities, the matter is easier. If a Tuvinian, who called himself a Shaman, made a tambourine and wears the suit, tries to earn money due to gullible Russian citizens, he quickly becomes a drunkard, falls ill and dies. If one has kept oneself, Spirits come to the call. One should climb down the hell to save one’s lost soul and call the mother-beast.

I have never tried to heal and to raise my value with it for myself and others. But the texts are always matching: in particular, special words accompanied with beating rhythm. Winnie Pooh, who was touchingly called “a Poet” at the beginning of the Russian animated cartoon, was a true Great Shaman, as well as “The hedgehog in the fog”.

Whereas a Priest doesn’t have to see Gods and Spirits (he should know the ceremony and hold the mass ritual), Shaman has to see and receive specific recommendations for correcting the situation. Akyn, or a teller, has to be able to sing well, play skillfully and know large, sonorous variegated words. During the mass ritual a priest can cause the member’s recovery; he can see Gods and Spirits and improvise using musical instruments.

But it is not necessary and sometimes it is harmful.

Shaman can also hold the mass celebration and perform Epos “Olonho”. But it isn’t necessary as well when one has to cure of a disease unknown to both to science and congeners. Akyn can hold the ceremony and cure of the disease with his singing, but the objectives are again different from those of Shaman’s and Priest’s. When I am unobtrusively advised to come through Great Shaman’s Initiation or to learn throat-singing, I usually joke: “I’m afraid to spoil my natural talent.” The text which has embodied Power for me doesn’t need any decorations and mass celebrations, casting and performances. Text has come to me not for the sake of feeding myself. It was my soul that sang it to me. The True Tambourine did it. But what for?

Like Bernes (the famous Russian singer), who sang in his song: “I am just working as a magician…”, I do using my body in Yoga poses what no one does. And this alone could let me make a living by giving lessons: Yoga-teaching is a fashionable and called-for profession nowadays. Anyone can teach Yoga. Competition is always strong, and those who demonstrate the complicated poses better and train the simple ones while saying about their usefulness, who correct the clients, praise them and take care of them – they are supposed to be successful. But there are few talented ones, and not all of them are successful.

As for me, it was always boring to train simple poses and try too hard before the clients, to say compliments to them for their tiny success or even just for their coming to the gym between their office and night club. But Shavasana corrects EVERYTHING in the end. After the ‘corpse pose’ EVERYONE survives. Everyone becomes a bit better than before, more harmonious and lighter.

When Shavasana is combined with Tambourine end recitative, Doors are opening. The ancestors hear and come to help you – to relax by means of just bending and breathing deeply. But it means using a sledge-hammer to crack nuts.

Tambourine brings consciousness away; and if the Horseman knows the way, he returns with gifts and closes doors – so as to avoid getting insane having acquired; so that Darkness can stay below and Light can shine above; so that Life will make one happy and Death will come in certain time; there will be no fear of uncertainty but there will be depth and comprehension of something new; and loosening the exhausted Oneself. That is what my Khors sounds for!