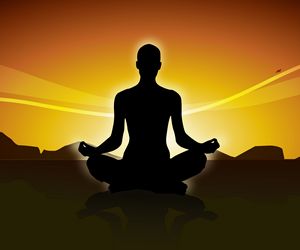 In Sankhya philosophy, among 25 main metaphysical elements of the Universe God is absent. The philosophic world picture of sanhya didn’t need any supernatural creature in order to explain the origin and development of the world. World is not the creation but the result of the natural evolution of spiritual and material elements, as the followers of Kapila, a man of wisdom. That is why sanhya-darshana is called the realistic philosophy or atheistic sanhya.

Though the classical Yoga borrowed the philosophic fundamentals of sanhya system, nevertheless, it took the other stand concerning God’s existence. That is why sanhya-Yoga is called theistic sanhya. God (Ishvara) and gods (various spiritual Beings) are present in classical Yoga. But it cannot be referred to the traditional theistic theories, much less to the polytheistic one (declaring a lot of gods).

Traditional theism means belief in God as the Absolute Personality creating the world and controlling it. In such a way God is understood, for example, in Christian dogmatic theology. God of classical Yoga – Ishvara (Superior Atman) – has personal features, but the world creation and control are not attributed to Him. He is only present in the world to help living beings. It is obvious that here we deal with the non-traditional diversity of theism.

In the world picture of Yoga, beside God Ishvara there are also other gods that are understood as spiritual beings much more perfect than a person but less powerful and perfect than Ishvara. However, there is no insurmountable abyss between these ‘gods’ and a person. The Yoga path makes a person more perfect, liberates him from the material world and approximates to these spiritual Beings.

Here, there is the idea of the further evolution of a person as a rational being, however, the evolution not on the physical spiral turn but on the spiritual one – more superior and more refined. This keeps us from referring classical Yoga to polytheistic theories like Indian Brahmanism or Olympic religion of ancient Greeks.

So, after those preliminary notes, let’s consider the Yoga theology in more detail.

“Yoga-sutra” and ‘Yoga-bhashya” mention some Superior divine Being – Ishvara. Neither Patanjali nor Vyasa speak (directly and in detail) anywhere about their theistic understanding of Ishvara. Nevertheless, their indirect statements allow to percept Him as Absolute Personality. Such a conclusion belongs to Vachaspati Mishra, one of the well-known middle-aged followers of sanhya-Yoga theory.

He considers that such understanding, as the original authority, points to Ishvara as to Personal God. The prominent Indian historian Sarvepalli Radhakrishnan also saw in classical Yoga a certain theistic position, though he noticed that it isn’t easy to describe Patandjali’s God. The matter is that Patandjali’s aphoristic text and multiple meanings of Sanskrit words allow to understand the sense differently, and the boundary between non-traditional theism, polytheism and pantheism (the religious and philosophic theory uniting and sometimes identifying God and the world) is very thin.

Ishvara is a certain manifestation of Universal Consciousness (Purusha). “It is a particular Purusha,’ Patandjali writes, ’who is not touched by affects, karma, its maturing and hidden traces”. It can seem that Ishvara’s state is identical to the spiritual state of liberated yogis, who achieved absolute separation from material being. But Vyasa objects to it saying that Ishvara has newer been and will newer be dependent on matter. He has always been and will always be liberated and separated.

He possesses the highest essence. He is pure Purusha, turbid with nothing, absolutely free, deprived of any characteristics, adjoint to objective natural being. Even time characteristics can’t be referred to him.

Ishvara has the highest power having nothing equal to it. Ishvara is he who realizes the possession of the highest limit of knowledge. He is perfect. He is the teacher of ancient and modern men of wisdom. The verbal expression or the symbol of Ishvara is the sacral syllable-mantra Om (Aum) which yogis pronounce while being concentrated on the spiritual image of Ishvara.

Let’s ask the question about the necessity of God Ishvara in the Yoga world picture. The philosophic logics or ontology of sanhya system don’t induce to it. Patandjali, like the other followers of Kapila’s philosophy, could well explain the world structure without the idea of God.

Because Ishvara is not the creator of the Universe like Brahma, not the keeper of in like Vishnu and not its destroyer like Shiva in Hinduism theology. He even doesn’t control justice in the Universe because it is controlled by karma – the natural Law of reasons and consequences. The main purpose of Ishvara, according to Yoga fundamental sources, is to help his loyal spiritual yogis in achieving absolute liberation, but not to provide with it out of charity, like God who does it in Christianity and Islam, to help notably.

Patandjali believes that liberation is the spiritual result of a yogi’s personal efforts. Ishvara serves as Maha-Guru, Spiritual Master, Superior Teacher on the path of acquiring Verity and Freedom. But it is not understandable why such a Teacher should possess the attributes of the god understood theistically, but not be, for example, the spiritual cosmic Essence – highly developed and perfect, but still natural.

In classical Yoga, it is accepted to consider that the connection-disconnection of Spirit and Matter depends on Ishvara, which is, as we remember, the start and the end of the Universe evolution. But even if it is so, it is unclear what makes us percept Ishvara as Divine Persinality, but not as the impersonal Power or the highest law of Objective Reality. Neither Patandjali, nor Vyasa nor their followers give any convincing philosophic arguments: why Superior Spiritual Origin should be understood as Personality or some Essence (Being) but not Spiritual Energy or Law.

In general, Patandjali doesn’t even try to prove the existence of God. It seems that it isn’t very important for him. According to him, the personal God plays an auxiliary role as the purpose of a yogi’s spiritual efforts is not formulated as uniting with God. This purpose is liberation through separating Spirit (Purusha) from Matter (Prakriti).

In his commentaries, Vyasa gives some arguments in favour of existing Ishvara. They correspond to the traditional ontological proof of God (ontology is the philosophy section studying the fundamental principles of objective reality, its most general essences and categories, structures and laws), which was actively used by the followers of catholic philosophy after St. Tomas Aquinas. However, Vyasa left Aquinas one thousand years behind. The sense of his reasoning is the following. If there is perfection, there should be its limit – superior perfection. God-Ishvara is just that limit. There cannot be any perfection excelling him or equal to him.

But it is obvious that such a proof didn’t satisfy everyone. These are two simple arguments. Firstly, why is it assumed that there is the perfection limit and not the infinite spiral of evolution? Secondly, even if the superior perfection does exist, why do we identify it with personal God and not with Absolute? Buddhists had a lot of counter-arguments disproving not only personal God, but any God at all.

The term atman (meaning ‘true Ego’, an absolute subject unable to be an object) is one of the basic concepts of Hinduistic religious philosophy. It can be said that for Buddhism the category atman is also basic, and in two relations. Firstly, as if departing from the opposite, because the whole Buddhist theory departs from the concept atman as if being defined by its content. Secondly, the theory of anatma-vada also supposes self-cognition, as in order to achieve nirvana or awakening, a practicing yogi should cognate himself as a non-atman. That is, here the cognition of ‘true Ego’ also forms the essence of the path to liberation.

In the system of classical Yoga the reasons of God appearance are rather in the social-cultural sphere than in the philosophic or mystical one. Perhaps, people trying to propagate the theory of the Universe sankhya and method of Yoga discipline faced the difficulties in propagating these ideas because of the unsatisfactory religious enquiries of the surrounding.

As a matter of fact, the Yoga system paid tribute to the religious-mythical consciousness of the epoch where the central place was taken by the cults of anthropomorphous (human-like) gods whom the human consciousness descended to their level of understanding and imagination. Most Hinduists still believe in the Universe God who is inside every living being simultaneously and who can be approached to in different ways. As Hindu followers believe, the supreme creature can be worshiped in numerous forms – in the form of Shiva as the great ascetic-yogi, in the form of a human-lion, in the form of a beautiful girl or even formless stone. The supreme creature can be manifested as sculptures in temples or as gurus and the saint living nowadays.

The appearance of personal God, God-Guru, God-Teacher, in Yoga made it attractive for the followers of Vedic religion in the whole variety of its cults and sects.

Perhaps this moment played an important role in the survival of classical Yoga in the culture of Hindustan. In this sense, Yoga was historically luckier than Buddhism which excluded God from its meta-physics and with the laps of time had to search refuge on the territory of other Asian countries.

The above philosophic ideas concerning the world structure and multiplicity of being plans are neither abstract theories nor mental speculations based on separate guesses of the authors of ancient Holy Scriptures. These are the interpretations of the practical results achieved by yogis in experimental investigations of other worlds for the sake of Superior Verity cognition.

The state of mind of most embodied human beings nowadays is ignorance – Avidya. It means that a great number of people in the modern world do not understand their true nature. That is why in order to achieve full self-cognition a person should develop God’s features in oneself up to the level when they can be realized.

Due to this development, a human being will turn oneself into the real embodiment of true knowledge. Then the limitation of personal will paralyzed by the laws of material existence will be changed into the freedom of universal will of the Divine Inspiration world. Having realized the identity of superior personal ‘Ego’ and ‘Ego” of the Single, the living being also acquires the awareness of the identity of personal will to the universal one.

Being embodied in the physical body, the mortal human body formed by the rough solid matter, a yogi still has the ability to visit the highest plans or other worlds in thin bodies. Due to it, he acquires the ingenuous experience of comprehension of Superior Verity – the mystery hidden behind the outer sight of creating.

From the philosophic positions of Yoga, the Single – Divine Creator of the objective world – intends to see himself in the best of his creatures. This intention is to be fulfilled in the earthy world only when the Creator’s greatness completely manifests in a person, His own concentrated embodiment.